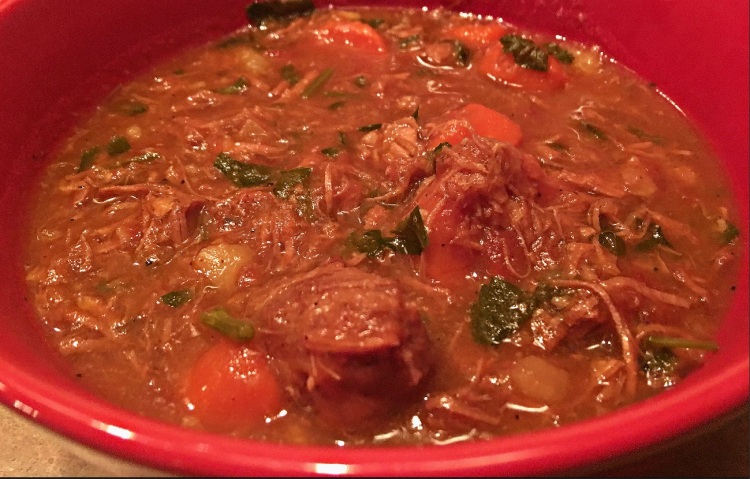 So, a couple of things before I get into the story and recipe…

First and foremost, it’s great to be back and putting up new content for you all! It’s been almost a year since my last post, which is far too long. Unfortunately with work, coaching, and three VERY active kids, time is a commodity that I don’t have. Heck, I barely even get a chance to cook anymore.

Second, I know the pic isn’t great. Listen, by now you know me. I’m not your typical food blogger where I’m cooking for the sake of the blog post. I’m cooking to feed my family and friends. I don’t have the time to stage the photo with the perfect lighting, and the perfect bowl or crock, and maybe a fancy linen napkin with a pretty spoon on it, and some herbs sprinkled around the counter, a glass of wine in the background… If I tried to do that my family would kill me. This pic was taken while seven very hungry people were sitting at the dining room table waiting to eat. All I had was enough time to snap a quick shot before I had a familial mutiny on my hands… So, the pic is what is is. But what really matters is the soup, and that my friends was pretty darn delicious!

So this past weekend we finally had a day as a family where we had nothing to do. No soccer, no baseball, no football, no wrestling, no dance, no chorus, no family parties, no classmate/teammate/friend birthday parties, no work obligations. NOTHING. You have no idea how rare that is for us. It may happen 15 days out of 365, and quite frankly that’s probably an exaggeration. Well anyway, the weather has finally taken a turn here along the Atlantic Coast, and it is just wet, windy and raw. When I asked my family what they wanted me to make for dinner on this rare free day, the word that jumped out of everyone’s mouths was “SOUP!”, and I was more than happy to oblige (honestly I was going to make soup regardless of their responses, but they don’t know that, LOL!).

Off to the store I ran (ok, drove, my running days are long gone). Normally I try to go in with an idea of what I want to make, in this case soup, but also with an open mind to let the ingredients talk to me while I’m in the store to lead me to the end product. What looks good, what’s on sale, what suddenly jumps out at me. Well, that was not the case on this day. I was craving beef stew, and in a big way… Until I saw that the cheapest beef they had was $7.99 per pound, and the beef I really wanted to use (short rib and shank) was $9.99 per pound. Ouch. I need five pounds of meat for the stew! Hmmm, maybe time to rethink this… I looked around and noticed that they had Pork Loin Roast Sirloin Portions on sale for a $1.49 per pound. ONE. FORTY. NINE. So let’s see, I could spend $40-50 for beef, or $7.50 for pork… Yeah, you guessed it, pork won!! I ended up feeding 8 people (four adults, a teenager, two very hungry pre-teens, and a toddler) for $22, and the meal was delicious. You just can’t beat that!

So here’s my Rustic Pork Stew recipe, and some wines to pair with it… Enjoy!

Prep + Cook Time: About 6hrs*
*Note: You can cut down the simmer time on this if you really want to. I prefer my meat really tender and broken down in the stew, but I know some people like slightly firmer chunks of meat. Up to you.

Use a large sauce pot, no less than 8 quarts.

Heat the olive oil on High, then add the cubed pork, along with one tsp each of salt and pepper. Sear until lightly browned on all sides, then use tongs or a slotted spoon to remove the meat (leave the oil and rendered fat), set the meat aside at room temp. Add the pork bones, cook until browned. Reduce the heat to Medium, then add the garlic and onions, along with one tsp of salt. Cook until they start to sweat, 3-5 minutes. Increase the heat back to High, add the cream sherry, boil until reduced by half. Add the cooked pork cubes back to the pot, along with the beef stock, water, diced tomatoes, and tomato paste. Bring to a boil, then reduce the heat to Medium-Low. Simmer uncovered for 2 1/2 hours, stirring periodically. Then add the potatoes, carrots and parsnips, along with one tsp each of salt and pepper, simmer an additional 2 hours, stirring periodically. Using tongs, fish around to find and remove the bones. Add the chopped parsley, simmer an additional 20 minutes.  That’s it, you’re done. Ladle into bowls, cut some nice crusty bread, and eat up!

Now let’s discuss wine pairings… We’re talking some pretty full flavors here in the stew, so you want a wine with some body and backbone, but you still don’t want anything TOO big and bold that will overwhelm it. With stews I tend to lean towards Italian wines like Chianti Classico, Barolo, Barbaresco, or wines from Etna. Also wines from Southern France work quite well, think appellations like Côtes-du-Rhône, Saint-Joseph, Languedoc, or Cahors. I’d recommend staying away from anything too dark or fruit forward, like California Cabs or Zins, or Argentine Malbecs. Here are a few recommendations…

Fattoria di Fèlsina Chianti Classico, Tuscany, Italy – Fèlsina is one of the great names of Tuscany, and their Chianti Classico never fails to impress at this price. On the nose are aromas of black cherry, dried herbs, leather and sweet pipe tobacco. On the palate the wine is simultaneously powerful, yet elegant, with flavors matching the aromas, yet further nuanced with hints of earth and subtle oak, framed by well integrated tannins giving structure and strength. PP Score: 92 (Retail $19-24)

Socrè Barbaresco, Piedmont, Italy – Socrè is one of the best kept secrets of Piedmont, plain and simple. With three hectares in Roncaglie (right below the famed Langhe estate of Gaja), they have been making some of the purest expressions of Nebbiolo since 1869. The 2013 Barbaresco’s aromatics burst out of the glass, with hints of dark cherry, dried herbs, anise, rose petal and lavender. The wine has a bright, explosive opening, with expressions of red and black fruit, herbs, and leather, but then calms in the mid-palate, with nuances of crushed flower, earth and smoke, leading into a long and lingering finish. Unbelievable for the price. PP Score: 94 (Retail $33-37)

Domaine Vincent Paris Saint-Joseph Les Côtes, Rhone, France – Despite the relative youth of both Vincent himself (44) and his winery (est.1997), the wines of Monsieur Paris are widely regarded as some of the best of their respective appellations, and the 2015 Saint-Joseph Les Côtes is no exception. Made from Vincent’s younger Syrah vines (10-20 years), the wine is similarly youthful and energetic. Aromas of dark cherry, ripe raspberry, crushed flowers and cracked peppercorn waft from the glass. On the palate the wine is a beautiful balance of tart red fruit, earth tones, Asian spice and wild game, framed by moderate acidity and firm tannin. Still young and capable of being cellared, but showing well now. PP Score: 91 (Retail $23-28)

So there you have it, my absolutely delicious (and inexpensive!) Rustic Pork Stew and some equally delicious wines to enjoy it with. Thank you very much for the visit, and hopefully you’ll try the recipe. New content coming… well, at some point in the future (hopefully not another year!). In the meantime grab a steaming bowl of soup, pour a beautiful old world red, sit back, and relax. Life is short, you deserve to enjoy it!

Husband, dad, home cook, wine snob... lover of bacon. I have spent my entire adult life surrounded by fine food and fine wines, starting with fifteen years working at, or running, some of New Jersey's top restaurants, and now the last two years working for one of the top fine wine distributors in the United States. I have absorbed a ton of information on food, wine, pairings and techniques during those seventeen years, and I'd love to share what I've learned with you! View more posts